HOW TO BOOK A WEEKEND

Booking a stag, hen or party weekend with Infinity Weekends couldn’t be simpler. In three easy steps you can have your weekend reserved, with only £50 deposit!

GET A PARTY QUOTE

In a rush and want a quote fast? We will provide you with a quick quote today, no obligation. Just send us the date of your party, group size and date! Click here

Trusted by thousands of groups, we have been providing party weekends since 2004 and have hundreds of 5 star reviews for stag, hen and party weekends. See more…

Leeds is the central party city of Yorkshire, offering the excellent Trinity shopping centre for some daytime spending, and a nightlife to remember! A hen night in Leeds will have one of the best experiences of their life as they paint the town red, get on their dancing heels and hit the cocktails! Celebrate the hens last few days of freedom and step into the buzzing bars, pubs and clubs that this university city offers. Most of the best bars are situated around the town centre, so everything is within easy walking distance. If you’re cocktail fanatics and want to try some of Leeds best concoctions then drop in to Mook to try some heady drinks, look out for the buy one, get one free deal too! If you want to see the city views, then head to the Sky Bar which overlooks the town and pours the finest champagne cocktails you will ever taste!

A hen night in Leeds can bar crawl to their hearts content with the wide range of bars, karaoke bars, pubs and cocktail bars available. The Belgrave Music Hall offers loads of theme nights, live music and comedy nights so it’s worth dropping by to see what’s occurring. For the ultimate nightclub experience, try Club Mission which opens at 11pm and closes close to dawn. Get your dancing shoes on because the DJ’s will have you bopping all night! If you’re clubbers and ravers, then try The Warehouse which hosts one of the biggest nights for ravers with techno and house music in a renovated warehouse. Having your hen night in Leeds will ensure that you have the most memorable night of your life! 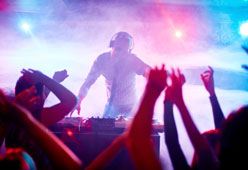 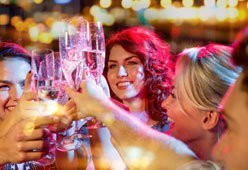 Our accommodation is designed for group parties!

We know exactly what you need and want, and know exactly which hotels are more than happy to cater to stag and hen parties, with some great self catering apartments sleeping three – six people each. All Inclusive is also available if your budget is a bit larger than most! If you realistically tell us whatever you require we will do our very best to get it for you!

Infinity Weekends makes sure you are in the best party resorts, from places with over 300 days of sunshine a year, to ski resorts, to adventure and clubbing. Offering a vast array of actvitiis, providing something for everyone, sandy beaches and entertainment to cater for the thousands of party goers each year, providing great value for money, whilst enjoying the party of a lifetime.

All our apartments and hotels are also centrally located, within 10 minutes walking distance to the main nightlife, bars, clubs, beaches... making it the perfect base for any stag or hen weekend. There are restaurants and bars close by to every accommodation so you should never need to hunt one out!

See our reviews below, plus lots more on Facebook!

Leeds is one crazy city… I didn’t realise it was so big with so many wicked bars! We stayed in a hotel about 5 minutes walk from the town centre, so we were within stumbling distance. Spent quite a lot of time at Roxy ballroom playing pool in the afternoons sinking the beers, then after some food we went to a lot of the other bars. The Viaduct was a bit random (drag queens) but something different! We surprised Will with some extra special lady VIP treatment at the lap dance club, I think he liked it!

Just back from a stag weekend in Leeds and I’m still limping! Thought I still had John Travolta’s dance moves, but it seems not… We had another brilliant stag weekend booked through Infinity, you are the experts!! Cheers guys ;)

Leeds was mad! We arrived on the train which is in the city centre and only had to walk about 8 minutes to our hotel. Dumped our stuff and headed straight to the bar! Not sure we should have booked the go-karting so early the next day (11am), but after a few laps we woke up! Went to a comedy night on the second night, then ended up at a wicked club. Thanks you lovely lot!